Loving and Listening: Honoring our Diversity as Multifaith & Nonreligious Neighbors

The Jewish, Christian, Muslim, Bahai, Sikh and nonreligious neighbors of the

surrounding Metrowest area gather for opportunities to come to know one

another and to consider how our unique religious and secular worldviews

​can help us flourish together.
We also include programs from the Multifaith Collaborative of the Open Spirit

​ Center of Framingham and the Islamic Center of Boston, Wayland.

Christian Muslim Dialogue: Digging into the Qur'an and the Bible

​This paper argues that the Qur’anic passages on the “māʾidah” are perhaps a direct allusion of Jesus’ Promise of the Spirit, as found in the Final Discourse of the Gospel of John and its eventual fulfilment in the Book of Acts. Apparently, the Qur’an does not see the Promise of the Spirit and the Eucharist, or the Lord’s Supper, as mutually exclusive, which is also evident in the epiclesis and anaphora of the early churches, such as the epiclesis of Addai and Mari. It is unknown, however, if the Qur’an simply interpolates this situatedness when comparing the Last Supper narrative in the Synoptic Gospels with the Gospel of John, or if it does so based on Tatian’s Diatessaron, which was widely used by the Syriac church, during the time of the Qur’anic composition.
​The relationship between the Last Supper, the Eucharist, and the Holy Spirit in some Christian traditions make all a likely candidate for the “māʾidah.” Since the Gospel of John emphasizes spiritual food over material food and replacing the Last Supper with the promise of the Holy Spirit, the Qur’an might associate the “māʾidah” as a spiritual meal that descends from heaven, in which the Holy Spirit is perhaps the carrier of this spiritual meal.
See Video Here

Ramadan in Quarantine from The Atlantic on Vimeo. 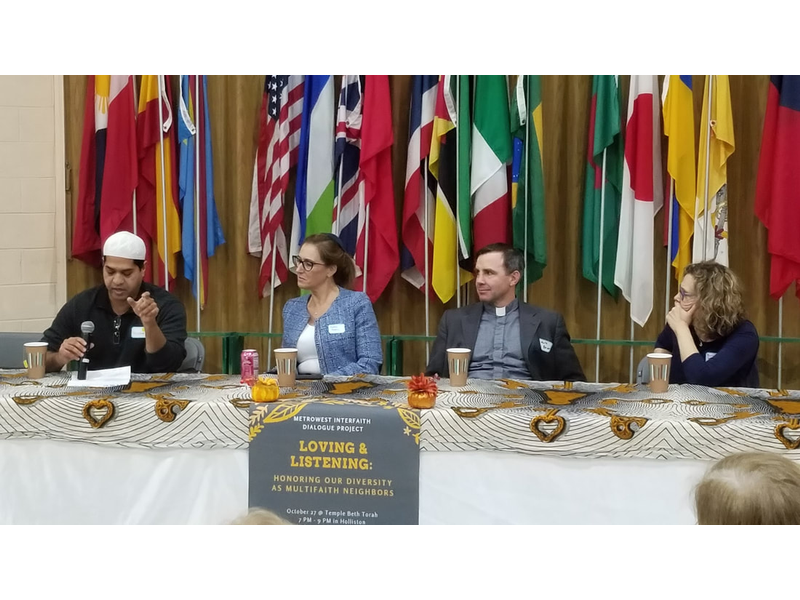 Twelve members of faith organizations in MetroWest, including Our Lady of Fatima Shrine in Holliston, work on a regular basis to make their communities more inclusive. They called it the MetroWest Interfaith Dialogue Project (MIDP).
“Our hope is to the honor the religious and nonreligious diversity of our communities and neighborhoods by creating an interfaith community within communities of different faiths. We focus on three goals: Foster opportunities to come together in order to come to know one another and the faiths that inspire us; Gain insight on how much we share in common through our faiths and values; Discover how interfaith dialogue and action can make a difference in our communities and neighborhoods and helps us all flourish together,” he said.
Read the full article here

​Webinar: The Role of Mary in Christianity and Islam

​Questions considered included: What can different religions teach us about resilience in this difficult time? How can we personally foster resilience during the pandemic? We hope you enjoy this recording of our meaningful discussion. *This panel was supported as part of the John Paul II Center Russell Berrie Fellowship Alumni Grant Program, and by the Interfaith Youth Core (IFYC) Alumni Leadership Fund. We are grateful to both groups for their support in bringing this project to life.
This was an ACWAY (A Common Word Among the Youth) project. ACWAY is an international network of young people committed to bringing multifaith projects to their communities.

Interfaith Prayer with Some Members of MIDP, December 9, 2020 for Hartford Seminary, CT

​Stealing from the Saracens: How Islamic Architecture Shaped Europe & America

St. Paul's Cathedral in London
The time has come to examine Gothic in the same way, since Cram never realized, along with Americans and Europeans in general, that key elements of Gothic architecture — the pointed arch, the trefoil arch, ribbed vaulting, and many other features — were born, not in Europe, but further east, often evolving from styles that were associated with a completely different religion.
Even Eurocentric architects cannot deny that the pointed arch had its origins in Islamic architecture. It appeared in the 7th century Dome of the Rock in Jerusalem, built as the first Muslim shrine by the Umayyad caliph Abd al-Malik, and was then further developed under the Abbasids in Baghdad
Click to Middle East Institute

The Journal of Social Encounters has published Fr. Carl’s comparative study on the description of Mary in the Gospels and the Qur’an that “opens us up to the profound mystery of God that transcends the boundaries of both of our faiths…” Access the Journal here.
DOWNLOAD THE ARTICLE HERE

Dialogue Between Judaism, Christianity, and Islam: It's Joys and Challenges

Dehumanizing and Demonizing Language and How to Confront It

RNS) — On Tuesday nights at 8:30 p.m., tens of thousands of people throughout France — believers and non-believers, Jews, Muslims and Christians — log on to Facebook to hear the nation’s foremost female rabbi discuss the intersection of racism and anti-Semitism and help them make sense of a modern plague.
“We are in a moment of extreme vulnerability when life and death hold hands,” said Rabbi Delphine Horvilleur, known for her original interpretations of Biblical texts, psychoanalytic thought, art and poetry. “Some people will use this moment to create a bubble of protection, to close borders and embrace ideologies of contamination that demonize people. But what is the meaning of my life if confinement makes me blind to the other?”
Horvilleur, 45, who has been called a rock star in a leather jacket, is a former model who has appeared on the cover of French Elle. The wild curls framing her face have been compared to the sidelocks of Hasidic Jews. She finds the descriptions amusing insofar as they counter stereotypes and help her reach audiences across cultures.
“I’m trying to create bridges between worlds that have stopped talking to each other,” she said. “I’m trying to create links between words and worlds.”
Horvilleur is also known as the rare public intellectual who has brought faith into the conversation in a country committed to laicité, or secularism. And though she is also one of the few progressive rabbis in France’s overwhelmingly Orthodox Jewish community, she has become a leader of a growing movement of Jews from all denominations. Less an activist who urges congregants to take to the streets to protest injustice, she is a purveyor of ideas and a presenter of possibilities in the tradition of Simone de Beauvoir and Jean-Paul Sartre.
Read On

The tensions of our time are well-known. But there are stories that are not being told, because they are not violent and not shouting to be heard. One of them is that all over this country, synagogues and mosques, Muslims and Jews, have been coming to know one another. There is friendship. There are initiatives that are patiently, and at human scale, planting the seeds for new realities across generational time. As part of the Civil Conversations Project, a live conversation at the Union for Reform Judaism’s General Assembly in Boston between Imam Abdullah Antepli and Rabbi Sarah Bassin.
ON BEING with Krista Tippet
Click here to listen to the conversation